Chuck’s Story of Eating Low Carb and Getting Healthy 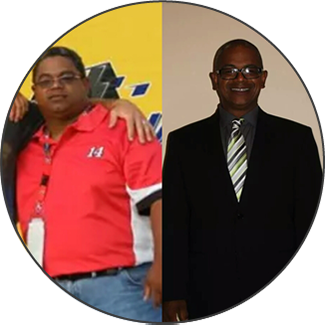 In this post, we’ll be meeting Chuck a low carb coach at The Newer You and an “experience expert” when it comes to eating low carb and making it work in real life on a real budget. This is the first in a series of posts we’re you get to learn more about the coaches here at The Newer You. We’re calling it simply “Meet Our Low Carb Coaches” and we’re starting with the Chuck’s story.

Chuck’s story began when he saw a photo of himself on Facebook and saw how overweight he had become. He was always a big guy, but seeing himself, and then seeing the scale over 300 pounds, Chuck was concerned about his health.

As a result of his weight, he was on two blood pressure medications and cholesterol medications. Surfing on the Internet, he saw an article about eating low carb and started following a plan. He got a scale and started weighing his food, and he began keeping a food journal.

After losing 135 pounds over the course of two years, Chuck lets himself relax on the weekends. While it may not work for everyone, it allows him to keep a positive approach when it comes to the foods he loves instead of fighting cravings and binging. More importantly, Chuck maintains a positive attitude about himself and his health, and that’s another key to his success.

The results speak for themselves:

Once he saw how much a difference it made in his life, Chuck started cooking for his wife, who lost 50 pounds as a result. Chuck works in the trucking industry which has recently started requiring drivers to pass a body mass index test to make sure they are healthy enough to drive. Combining his positive approach with the same lessons of walking and cutting carbs, he’s helped drivers lose between 60 and 75 pounds and have fun while they do it.

Chuck lives and works in Chicago, Illinois with his wife. He says walking is not only good exercise, it’s also a great way to relieve stress. Chuck is available for Online Coaching where you can get the inside scoop on his approach to low carb living, which includes ice cream!