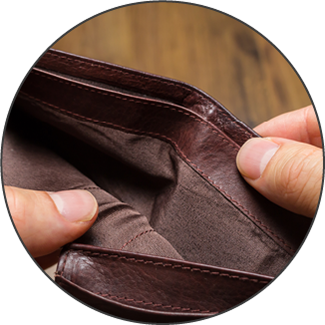 One of the biggest complaints that you hear when discussing a Low Carb High Fat diet is the cost. Many of the foods that become staples when you eat this way can be expensive, and shopping lists are full of high priced items. You may begin to feel overwhelmed.

There is some good news and some bad news. The bad news is that certain items like coconut oil, bacon, grass fed butter and nuts are, indeed, pretty pricey. But the good news is that once you get settled and used to this way of eating, your grocery bill will not be nearly as high as it was in the beginning.

Here are some ways you may be spending more than you need to, and what you can do about it.

You Are Buying Everything In Bulk

In every advice column promising cheaper grocery bills you will see “buy in bulk” in bold letters. Costco, Sam’s Club and other warehouse stores have become very popular. Not only for food items, but for everything. The first time you walk into a Sam’s Club you may be amazed that you can buy steaks, alcohol, a bounce house, and book a trip to Hawaii in the same store.

So, why are we going against the status quo and telling you to be wary? Because buying in bulk is not always more cost efficient. You may be losing a lot of money every time you walk through those enormous doors.

Let’s say you are walking through the aisles looking for produce. Before you get there, you have about a half a mile of store to cover, and there are a lot of items in between you and your goal. That means a lot of temptation for impulse buying.

Oh, hey! Shredded coconut! You eat that about once every three months. Now you can get pounds of the stuff for a mere $25! And look at that collection of gift cards. Spend $45, and you get $20 worth of merchandise free! That A1 Steak Sauce? Two huge gallons of it.

A lot of these items you wouldn’t have normally bought. They might seem like a steal, but you are spending money you didn’t plan for. There is nothing budget friendly about that.

Then there is the issue of how much of an item you can eat.

A Note From Coach Olivia: “I was given a giant tub of 9 pounds worth of feta cheese. Now, five months later, I am still eating feta cheese daily and haven’t put a dent in my frozen supply. That was a free item, but what about when you spend your hard earned cash on more than you can eat?”

Not everyone has a large extra freezer to stock up. Or the desire to pay the energy bill associated with owning one. Some items don’t freeze very well, either. That enormous jug of mayonnaise might seem like a good bargain at the time, but it won’t be when half of it spoils.

There are a number of low carb foods out there promising all of your favorite snacks and treats without breaking your diet. Tortillas, breads, cookies, candies…the list goes on and on. But they cost a pretty penny, and for a lot less than you might think you are getting.

On Amazon, Carbquick costs $13.99 per 3 lb box. They claims that this makes approximately 42 servings. However, each serving equals to ⅓ C mix, which is enough to make one normal sized biscuit.

It is difficult to say how that would translate to other foods, such as pancakes and pizza crusts. Let’s assume it would be more effective to say three “servings” per actual serving of food you would eat, meaning you are looking at closer to 14 servings, or around $1 per serving.

Plus, you have the issue of nutrition, which is questionable in the case of these products. The net carbs are set at 2 grams per ⅓ C serving. If we triple that, it is 6 grams of net carbs. The reason the carbs are that low is the addition of dietary fiber to “offset” the impact.

Unfortunately, it doesn’t work that way. The added fiber doesn’t change the blood sugar spike, or the insulin response, both of which lead to food cravings and potential fat production. You might as well be eating the gross carb amount, or 16 grams per single ⅓ C serving!

Some packaged foods are genuinely low carb, but are so expensive per serving that it adds up fast. Miracle Noodles, a product made of mushrooms as a pasta replacement, is a whopping $13.59 per 44 ounces on Amazon. A serving size is approximately 3 ounces.

But to put that into context, think of real pasta. The box claims 2 ounces is a serving, which comes to less than ½ C. Have you ever only eaten a half a cup of spaghetti? These Miracle Noodles are even lighter, so you will almost certainly eat a double that amount.

So instead of the presumed 14 servings of the large 44 ounce package, you are looking at closer to 7 servings. That is as much as $1.94 per serving of the noodles alone.

It is best to avoid these packaged low carb replacements, and instead stick with real food. You could have real mushrooms, for example. Or invest in a spiralizer and make some zucchini or cucumber noodles.

All three of these issues are caused by the same source: glucose. They are eating just enough carbs that they are unable to convert to burning fat as a fuel source. This is keeping their body in limbo, giving them carb withdraws without providing enough of the macronutrient to satisfy the body’s signals.

A low carb diet is going to be expensive if you are eating huge amounts of steak, cream, butter, cheese, avocados, and other foods all day long. But the point of cutting carbs low is that the hunger goes away as your body adapts. In fact, many people experience a suppression of appetite every day as a result.

Followers of Low Carb High Fat diets often take part in short daily fasts, not eating until lunch or even dinner without any problems. When they do eat, they become fuller faster, and for longer. There is no crash, getting “hangry”, or the desire to eat more and more.

As a result of eating less, you end up spending a lot less money on groceries. It is an interesting and frequently unspoken benefit of this way of life. But it takes a couple of weeks to get to the point where your body’s natural hunger ebbs.

You Are Having Cheat Days

Just like having too many carbs, cheat days can really throw you off. You may feel like you have been so good, and so a cheat meal won’t hurt. And maybe it won’t; many people are able to occasionally indulge and be fine.

But in the beginning of this diet (as in the first several months), even a single cheat day can throw you out of ketosis. That means the return of all of those cravings, all of that hunger, and all of the downsides you have to push through to get to where you were.

It might start out as a single doughnut. Before long, it has turned into a pizza, and a bag of potato chips. and a bowl of pasta. Carbs are easy to binge on, and you will end up consuming much more than you expected to. It might lead to extra trips to the grocery store, or your favorite restaurant down the street.

That gets expensive, and it might feel like you have spent much more on food when you look back at your month’s expenses. Part of it was that day, not the diet you had been following. Plus, you may have to eat more until your hunger regresses and you adapt once again.

You Are Baking A Lot

We live in a time where multiple movements have converged when it comes to product lines. Not only is Low Carb High Fat very popular, but so is gluten free, Paleo, real food, Whole 30, and more. This means alternatives around every corner that make baking while staying true to your diet choice rather simple.

But those flours, such as coconut, almond, and chia, are very expensive. Especially when you break it up into servings yielded per bag. Take for example Bob’s Red Mill Almond Flour (16 oz bag), priced at $9.98 at Walmart. There are 16 servings of ¼ of a cup in each bag, or 4 cups of flour in all.

Let’s look at a popular (and delicious) recipe, Chocolate Chip Cookie Cheesecake Bars by All Day I Dream About Food. It requires 2 cups of almond flour per 20 bars. That is half of the bag of flour, or $4.99…for one ingredient alone! That doesn’t take into account the 1 cup of shredded coconut, or any of the other necessary items.

Baking all of the incredible recipes out there to choose from can be tempting. For the occasional treat or special event you can rejoice in your wealth of options. But if you are doing it too often, you are going to find your wallet very empty.

Low Carb Doesn’t Have To Be High Price!

As you can see, how much you spend on your new lifestyle is going to depend a lot on you. What you buy, what you prepare, what you choose to eat…these all increase or decrease your monthly grocery budget accordingly.